TMJ or best known as the Temporomandibular Joint is like a sliding hinge that connects your jawbone to the skull, and every human count with one joint in each side of your jaw. Everything sounds good at this point, but what happens if they get damaged or sick with a disorder? Well, your body will start reacting to a source of pain that begins in your jaw point and later in the muscles that control your jaw’s movement, making it a very annoying sensation, this disorder is recognized as TMJ disorder.

The good thing about it is the fact that it has treatment, but if you decide to hold it for a long period, then other symptoms or health issues will appear like migraines, and you don’t want that to happen, right? For that reason, stay tuned to understand the exact relation between these two common problems, in this way you;ll know how to treat them properly, let’s begin.

How are Migraines and TMJ Related?

When people think about migraines, it doesn’t make any sense that they are related to TMJ right? Well, sadly they are, and this happens because of the amount of stress that your whole body produces due to the information and pain that is present in your jaw muscles, and since that will be very painful in some occasions, there will be one time where your body will say enough and it will start triggering other illness such as difficulty to open or move your jaw and even migraines. But thinking that TMJ is a direct cause of migraines is technically wrong, since they only appear after some certain situations such as the apparition of inflammation and a lot of stress, so it would be best calling them a trigger of migraine. 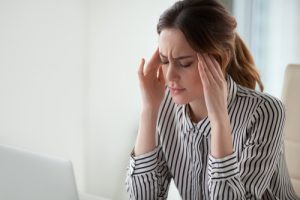 Since the appearance of migraines can make the situation even worse, dentists suggested making a name for this evolution of TMJs which receives the name of TMJ migraine, which tends to be very common even in people who don’t suffer from any problem with their jaw, or even other health issues that produce inflammation or pain, we’re talking more than the 30% of the world suffers from migraine at least once in their life! And other 15% share symptoms with the Temporomandibular Joints Disorders, so it’s better to take action before it’s too late.

At some point, the pain will be too hard to resist, so it will be better to take action before it’s too late like it has been said before, and while that sounds easy, in some circumstances is the exact opposite. If migraines develop thanks to TMJ then treating that problem first will be a good start point because once the problem with you jaw joints is solved, the amount of stress will be gradually reduced and the migraine will go away very soon, so, in simple words, if you’re suffering for common migraine then you should consider looking for problems with your jaw first and if there’s nothing wrong with your joints, then the treatment will be other depending on the situation. You may even have to go visit a migraines dentist in Baton Rouge

Since treating the problem with your jaw will be important, you should also know how to deal with it, and in some cases, it can be solved with medication like pain relievers and anti-inflammatories with some muscle relaxants, even though, don’t take anything unless your local dentist or professional medic give you the authority to take that treatment. If medication is not working, then some therapies will be pretty much needed like physical therapy or oral splints to relieve the pain and work with the inflammation.

Don’t Wait Until Tomorrow, Fix your Problems as soon as possible:

Sadly, some people tend to think that everything will go away with the pass of time, but in reality, everything will be worse than ever since jaw problems will develop further inflammation and the pain can become too difficult to handle, leading to more dangerous procedures to reduce the problem before it’s too late. So, don’t be greedy or ignorant enough to wait until some migraine appears and everything starts to go worse, act with time, go to your local dentist, ask for proper treatment, believe in yourself and more importantly, take care of your teeth and health, you truly don’t want to experience any TMJ at its most painful point, it’s really annoying in most cases, so stay safe!